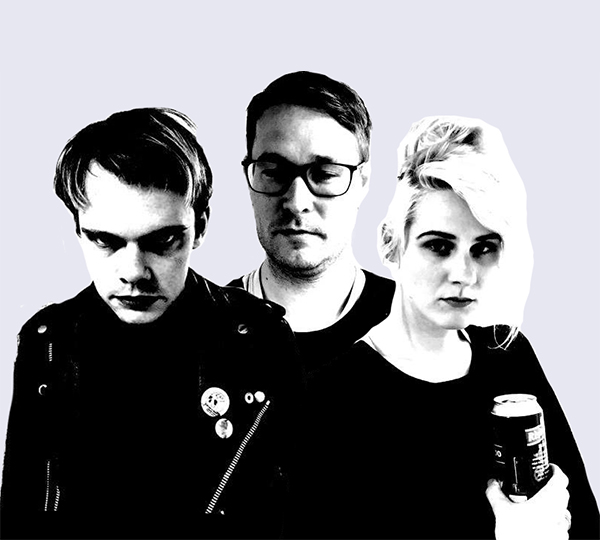 Delivering another batch of beauties from the Gothenburg scene, the Swedish imprint, Appetite Records, returns with three stunning LPs from Amateur Hour, one of the most celebrated projects from that part of the world. Not only have they pressed long awaited reissues of their hotly pursued first two full lengths - 2016's “Amateur Hour” and 2019's “Framtiden Tillhör Inte Oss” - in brand new editions of 500 copies, but they've timed them with the drop of the band's latest excursion into sonic wonderment, the stunning double LP “Krökta Tankar & Brända Vanor”. Riding the razor's edge between noise, radical experimentalism, and left-field, DIY pop, folk and shoegaze, this is one of those projects that has to heard and deserves every ounce of love that they've received.
By Bradford Bailey, 09 September 2022

Over the last year or two - via a series of remarkable releases by Arv & Miljö, Treasury of Puppies, Astrid Øster Mortensen, Enhet För Fri Musik, Blod, and numerous others - we’ve found ourself enrapt with the incredible sounds emerging from Gothenburg, Sweden. The city’s contemporary scene - a loose assembly of artists that constantly form and reform within numerous projects and collectives, but rarely, if ever, tour or play live - is marked by a number of important features, most importantly a strikingly individual sense of spirited and playful creative rigor that forms into iterations of experimental music that plays little mind to standing expectations of that idiom. Despite the self-imposed isolation, recorded music has served them well, allowing them to gather a growing international fan base. Among the groups at the heart of this scene is Amateur Hour, made up of Dan Johansson (Enhet För Fri Musik, Organ Of Corti, Oroskällan, etc.), Hugo Randulv (Enhet För Fri Musik, Makthaverskan, Skiftande Enheter, Typical Girls, etc.) and Julia Bjernelind (Typical Girls, Westkust, etc.), the subject of Appetite Records’ latest batch, comprising of beautiful vinyl reissue of their long out of print masterstrokes, 2016's “Amateur Hour” and 2019's “Framtiden Tillhör Inte Oss”, as well as their brand new, third full-length “Krökta Tankar & Brända Vanor”. Resting at the juncture of noise, radical experimentalism, and left-field, DIY pop, folk and shoegaze, each offers yet another crucial window into the scene that has been blowing all of our minds. 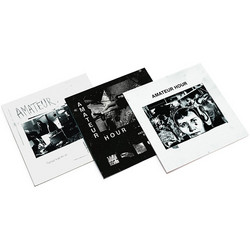 First emerging into the public consciousness during the mid 2010s, Amateur Hour is the trio of Dan Johansson, Hugo Randulv, Julia Bjernelind. While relatively constrained in its membership, even here we’re able to capture a glimpse of the overlapping intersections of Gothenburg’s collaborative scene. Johansson and Randulv also work together within the city’s more well-known supergroup, Enhet För Fri Musik, while Randulv and Bjernelind came together within Westkust and Typical Girls.

Like much of the music currently emerging from Gothenburg, the music produced by Amateur Hour is a fascinating hybrid of thoroughly digested, nearly unrecognizable touchstones that culminate as an irreverent, playful music entirely of its own image. Rumbingly in the ambience are the imprints of 1960s and '70s Swedish progg - the often ramshackle, politically charged movement that gave us Handgjort, Turid, Philemon Arthur and The Dung, Träd, Gräs & Stenar, and numerous others - industrial music of the '80s and '90s, numerous forms of free improvised music, shoegaze, the DIY spirits of punk and post-punk, and a countless number of others. That said, perhaps most notable is a lingering sense that the band is the product of three friends that got together to make pop music, but whose free-spirits and rigorous sense of creativity was allowed to produce whatever it might. 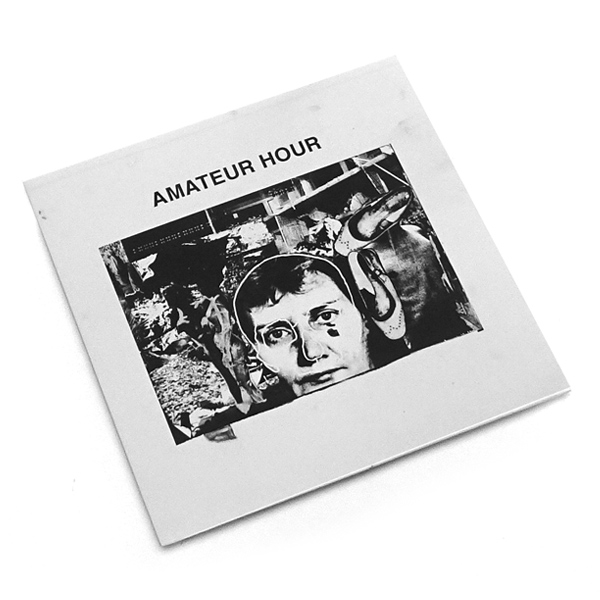 The band’s first LP, “Amateur Hour”, originally issued by Förlag För Fri Musik and now returning to the fold after years out of print via Appetite, was the first opportunity to catch a glimpse of this distinct sound and approach, albeit fairly limited to the reach of the album’s tiny edition of 100 copies. Here we encounter a project deeply invested in ambience, space, and a sense of mood, with the pointedly DIY character of the recordings contributing heavily to each. Captured in a way that feels like a microphone was haphazardly tossed in a corner and left to do its thing, hazy melodies and vocal make ephemeral nods to legacy projects like Cocteau Twins and Mazzy Star, shifting between moments of explicit song, bristling passages of experimental abstraction, and works that tread an inexplicable line between the two. 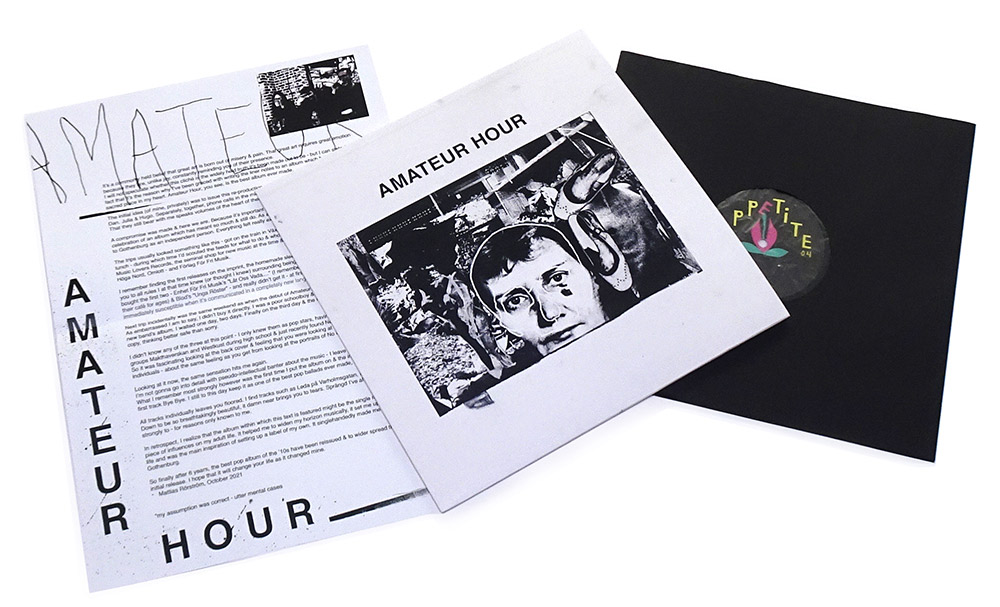 Drawing the ear into an entirely singular world, it’s little wonder why Amateur Hour, upon the release of their first LP, became one of the most talked about contributors to Gothenburg’s incredible sound, and the album rapidly went out of print, becoming one of the most hotly pursued artefacts of that scene. Blending the temperaments of folk, left-field pop, and shoegaze with a striking realisation of DIY experimentalism and broken electronic music, it’s hard to think of a better record to crack open what the scene to which they belong is all about. 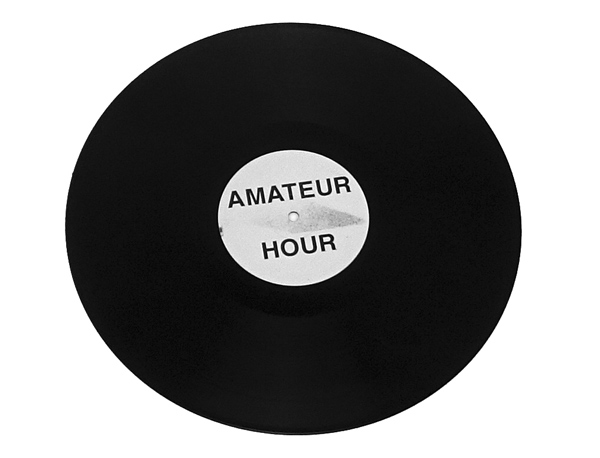 This brand-new press, dropping via Appetite Records, is issued in an edition of 500 copies with updated cover art and contains an insert with liner notes written by Mattias Rörström (Happiest Place Records). It’s not going to sit around for long, so grab it while you can. 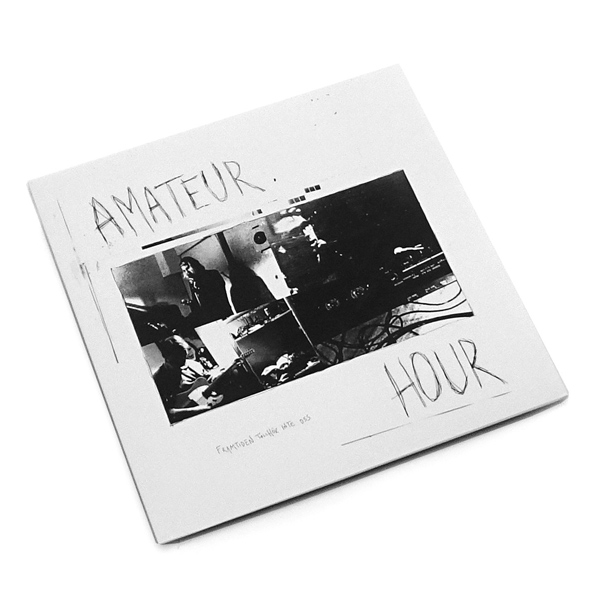 In the reasonably length period between their debut LP and their second full length, 2019's “Framtiden Tillhör Inte Oss”, Amateur Hour hadn’t let up steam. They’d also issued two very limited-edition cassettes and a lathe cut 7”. While very much in the spirit of the “Amateur Hour” - retaining its core elements, the album veers more explicitly toward the two poles that help sculpt the band’s distinct sound; song and rigorous experimentalism.

Rather than the arching sense of ambience that marked its predecessor, here we’re swinging on a pendulum, to-and-fro. In the words of Mattias Rörström, who originally issued the album on his imprint, Happiest Place Records, "The songs talk for themselves, appealing both to the romantic indie-kid as the most elitist avant-gardist. My mind ventures to referencing Nico’s The Marble Index and its lovechild with a Beat Happening tune. It’s Felt and Velvet Underground seen and interpreted through the Scandinavian experimental tradition, a sound not heard before anywhere.” It would be difficult to find a better way to put it. 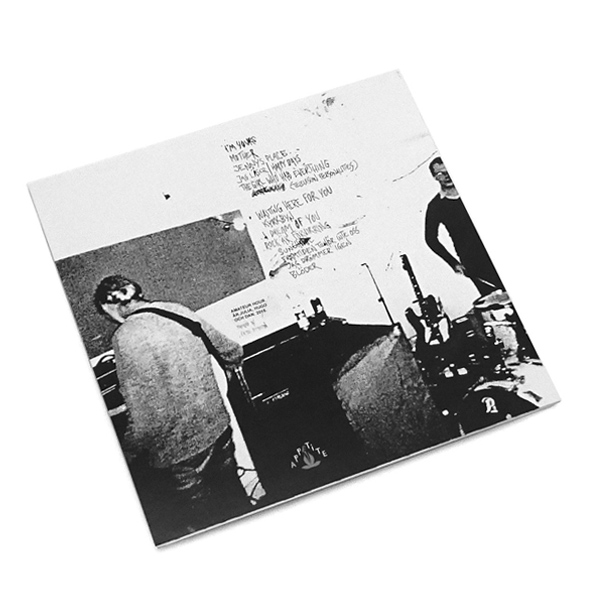 Between textural passages of electronic noise, the beauty of Julia Bjernelind’s voice plays against jangly melodies, often calling to mind '90s era outfits from the American West like Black Tambourine and Henry’s Dress, or any number of projects from the British C86 scene, before falling away within stretches of pure sonic abstraction. The effect is striking. Rather than the arching sense of ambience that marked its predecessor, here we’re swinging on a pendulum, to-and-fro, bringing the extremes and dynamics of Amateur Hour’s multifaceted pursuits into sharper focus. 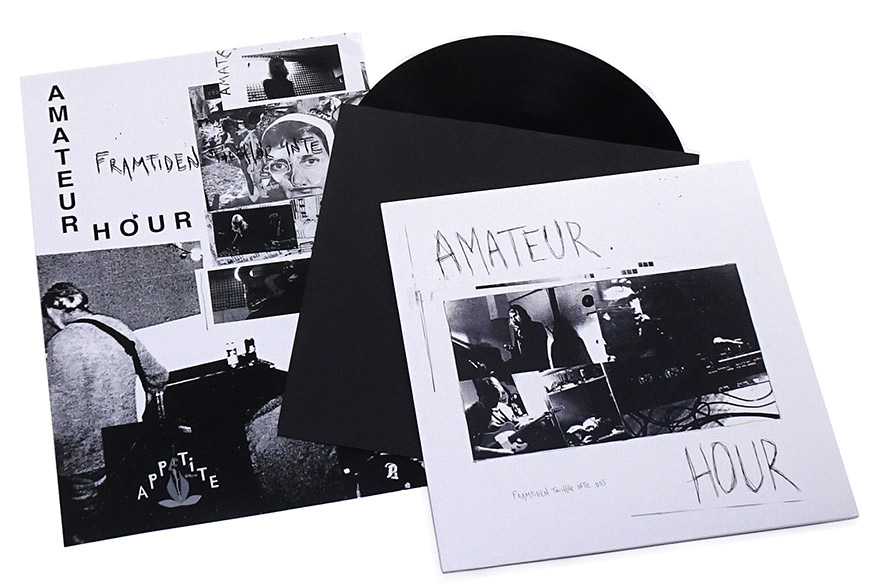 As beautiful and intoxicating as it is challenging, “Framtiden Tillhör Inte Oss” wholly defies any notion of the sophomore slump, rising high into the clouds with a glistening sense of clarity. Like its predecessor, the album was originally issued in a tiny edition which rapidly went out of print and has been hotly pursued ever since. Thankfully, Appetite Records has put an end to all that with this brand-new vinyl edition of 500 copies, perfectly reproducing its original sleeve and including a poster insert reproducing the original promo poster. Impossible to recommend enough! One of those records that keeps unfolding with every return. 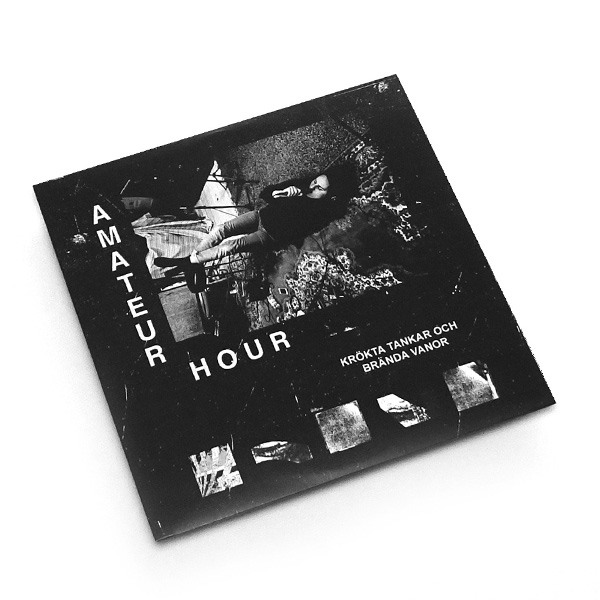 After an aching, two-year wait, Amateur Hour is finally back with their third full length, “Krökta Tankar & Brända Vanor”, issued as a sprawling double LP by Appetite Records. As with the case of “Framtiden Tillhör Inte Oss”, the album encounters the band in a constant state of evolution and refinement. While true to its trademark mix of dreamy indie pop and harsh industrial soundscapes, all held together with wobbly tape loops and no-fi production, where its two predecessors had been the product of improvisational jams and songs made up as they were recorded, here they’ve taken on a more considered and deliberate approach to the songwriting. 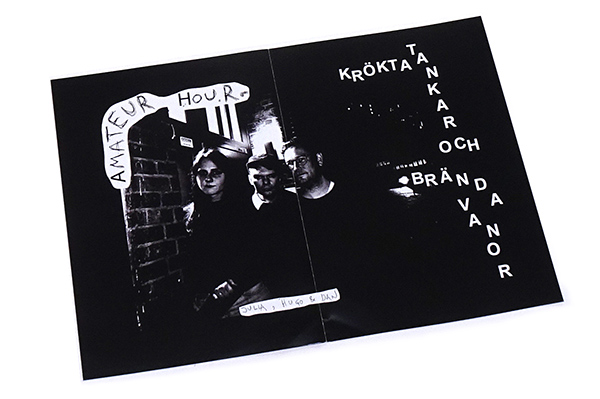 In many ways, while more refined and imbued with clarity of vision, “Krökta Tankar & Brända Vanor” is more similar to the band’s 2016 debut than might first appear. The album shifts between moments of explicit song, bristling passages of experimental abstraction, and works that tread an inexplicable line between the two, shedding that album’s arching sense of ambience to bring more clarity to each of these pursuits. Once again we encounter jangly, digested images of '90s shoe gaze and adjacent scenes - Bjernelind’s voice more beautiful and center stage than ever before - placed against increasingly abrasive expanses of experimental abstraction that intertwine electronics, distorted instrumental sounds, and field-recordings to brilliant effect, calling to mind the raw energy and confrontation of the late '70s and early '80s industrial and harsh noise scenes, infused with a rare presence of delicacy and sensitivity. Riding the razor's edge between them, these are among the album’s most visionary moments, encountering the band joining the extreme ends of their two worlds, slowly sculpting surprising hybrids where song rises from vast waves of abstract noise, captivating the ear and drawing deeper into the depths. 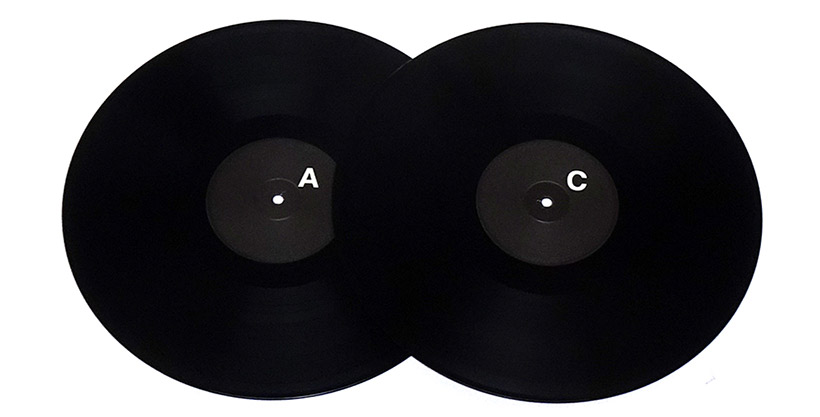 A brilliant statement from one of the most exciting projects on the Gothenburg scene, and arguably their best and ambitious record to date, “Krökta Tankar & Brända Vanor”, issued on double LP by Appetite Records in an edition of 500 copies, housed in a killer sleeve that includes a poster / insert. If you’ve been following and loving the efforts of projects like Arv & Miljö, Treasury of Puppies, Astrid Øster Mortensen, Enhet För Fri Musik, and Blod, this one can’t be missed. It unveils yet another crucial sense of the incredible things brewing in south west Sweden. Grab it fast. If Amateur Hour’s previous releases are anything to go on, this one is going to fly out the door.