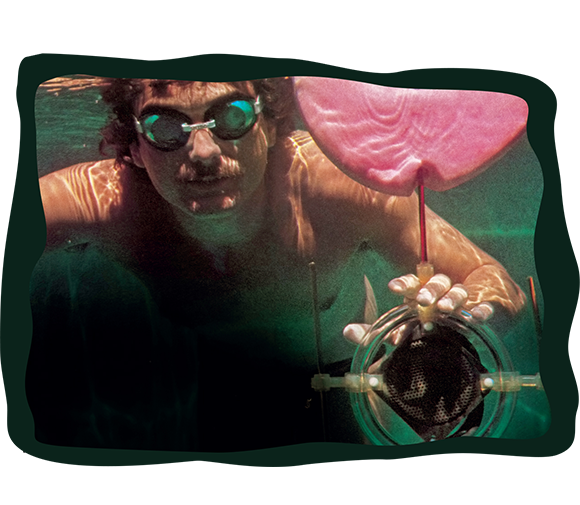 Possibly our favourite entry in Sub Rosa’s "Early Electronic Series" to date, Michel Redolfi’s "Sonic Waters, Underwater Music 1979-1987" radically expands our understanding of the pioneering, French electroacoustic composer’s visionary body of sub-aquatic music. Structurally radical, while remarkably listenable - flirting at the borders of ambient and New Age music via lush, ear drenching sonorities - these never before released recordings from one of the most important periods of his career can’t be believed until they’re heard.
By Bradford Bailey, 16 September 2021

Flowing freely out of their home-base in Belgium, over the last decade, Sub Rosa’s Early Electronic Series has offered crucial access to some of the most important works from the canon of 20th Century electronic experimentalism, including rarely heard, seminal efforts by Pauline Oliveros, Ami Shavit, Bülent Arel, Luc Ferrari, François Bayle, Henri Pousseur, and numerous others. Their latest LP, Sonic Waters, Underwater Music 1979-1987, is the series’ second outing to dive into the astounding depths of Michel Redolfi’s singular practice, this time exploring works produced during one of the most groundbreaking periods in the French electroacoustic composer’s career. Gathering ten works that intertwine acoustic and synthetic sound sources within the sonic gravities of underwater spaces, its sublime sonorities represent some of the most striking and visionary statements to have graced the series to date.

Following his classical conservatory training, at the end of the 1960s Michel Redolfi took the radical step toward electro-acoustic composition, and co-founded, at the age of 18, the Groupe de Musique Expérimentale de Marseille (GMEM) with Marcel Frémiot and Georges Boeuf. In 1973, he departed for the United States where he remained for more than a decade, working as a researcher in the electronic music studios of the University of Wisconsin, Dartmouth College and Cal Arts, beginning to sculpt a body of work that would begin to emerge on the seminal INA-GRM and hat ART imprints toward the end of that period and bring him considerable attention within his field. The most notable of these recordings belong to a body of work that was begun at the University of California in San Diego, where he developed an entirely unique genre of sub-aquatic music; staging both transmission and listening within an underwater context, and in so doing opening an entirely new field of artistic, psycho-acoustic and technological exploration. 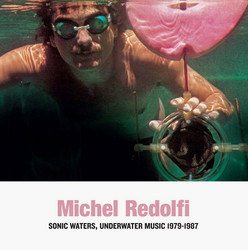 Sonic Waters, Underwater Music 1979-1987, Sub Rosa’s latest immersion into Redolfi’s output, stems roughly from the same period of his first two releases, Immersion / Pacific Tubular Waves and Sonic Waters (Underwater Music · Musique Subaquatique), issued in 1980 and 1984 respectively. Divided by the composer into two 'fields': Sonic Waters: Music for Fresh Water (1981), and Sonic Waters: Music for Salt Water (1979-1987), it gathers ten stunning compositions which represent previously unissued variations of the Sonic Waters series, created between 1979 and 1987 by alternating studio mixes with their re-recordings in the depths of the Pacific Ocean. As Redolfi himself explains about this body of work, “my aim was to situate field of electronic music within a liberating and futuristic experience, outside the concert halls and in sync with the development of new instruments - in particular the Synclavier digital synthesizer, the first model of which I acquired in 1977. As concert space, the Pacific Ocean seemed to me to be the ideal experimental medium for both acoustic and cultural reasons.”

Almost entirely defying any form of creative or aesthetic expectation - then as much today - the works comprising Sonic Waters entirely transform the territory of radical electroacoustic music into a visionary, dreamy expanse that immerses the ear, as much as the body and mind. Often falling far closer to ambient and New Age music, cast through a sci-fi lens, cascading and shifting, immersive long-tones, pulses, and rippling sonorities weave oceanic images from another world, producing what amounts to one of the most challenging and listenable bodies of creative sound anyone is likely to have ever heard.

Absolutely incredible from start to finish, Sonic Waters, Underwater Music 1979-1987 is an absolutely essential expansion into the visionary and singular body of work that has carved its path across the last 40 years and changed everything in its wake. Redolfi is one of a kind. His work stands tall among that of electroacoustic giants like Pierre Schaeffer, Pierre Henry, Luc Ferrari, and Bernard Parmegiani, while venturing far into territories that they never did. Ten out of Ten. This might just be our favorite entry in Sub Rosa’s Early Electronic Series to date.