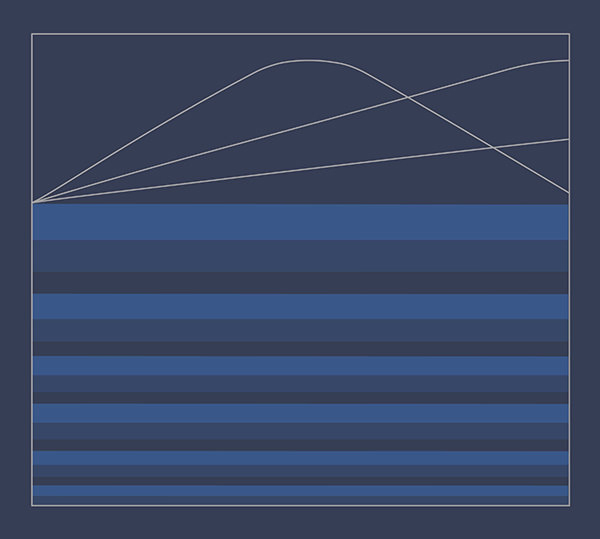 Falling somewhere in liminal space between ambient music, drone, and musique concrète - rendering a visionary image of each that few have ever come close to - Tod Dockstader's "Aerial 1" is an absolutely astounding piece of work by one of the great, sinfully overlooked pioneers of American Electronic music.
By Bradford Bailey, 18 June 2020

While avant-garde and experimental musics, in their quest for new forms of creative freedom, are often regarded as broadly inclusive practices and idioms, these contexts have never been perfect. Incredible and deserving artists - not fitting the mold of accepted practice, cultural paradigm, or educational qualifiers - have been routinely excluded from proper acknowledgement and participation. Fortunately, the reissue market has been making important inroads toward rectifying these sins - rebuilding history one album at a time - and there’s no more important case than the American composer, Tod Dockstader, who’s incredible body of work in electronic music, stretches from the early 1960s until his passing in 2015. Back in 2017, we were thrilled to witness the long overdue reissue of his privately issued debut from 1961, Eight Electronic Pieces, by Superior Viaduct’s États-Unis imprint, making it available for the new generations. Now Important Records has joined the fight, opening a crucial window into the composer’s incredible later efforts, with the first ever vinyl issue of Aerial 1 from 2005, launching their series dedicated to the 3 parts of this mesmerising body of composition, the last to emerge during his lifetime.

Like a number of the 20th Century’s more visionary musical minds, Tod Dockstader began in the field of visual art, studying painting and film, before moving to Hollywood and beginning to compose electronic music during the late 1950s and early '60s. Following the release of his first LP, Eight Electronic Pieces - later used as the soundtrack for Federico Fellini's Fellini Satyricon (1969) - he applied to use the facilities at the Columbia-Princeton Electronic Music Center, but was denied. Many suspect this due to his lack of academic training in the field. Consequently, he only received moderate acknowledgement during the period, but continued to create records on his own that were largely focused on tape manipulation effects; four in total issued by the tiny imprint, Owl Records, before fading from view toward the end of the decade.

During the early 1990s, Starkland began reissuing Dockstader output on Owl Records, which both received critical acclaim and brought him to a new, wholly receptive audience, unburdened by the biases and expectations of the orthodox '60s scene. Inspired, the composer returned to work for the first time in decades, creating two records with David Lee Myers, and the three individually released parts of Aerial over the coming years.

Aerial 1, originally issued on CD in 2005 by Sub Rosa, was 15 years in the making, drawing on Dockstader’s passion for shortwave radio, utilising material culled from over 90 hours of recordings, that captured cross signals and fragments from the airwaves, made during the middle of the night. The result is a slow moving, timeless work divided over 15 individually titled movements of varying lengths. While traceable fragments occasionally rise to surface, Aerial 1 presents a deeply organic manifestation of abstract sound, often feeling so natural and at ease with itself that it subsumes the ear in an oceanic drift, before transforming into pulsing and buzzing field.

Falling somewhere in liminal space between ambient music, drone, and musique concrète - rendering a visionary image of each that few have ever come close to - Aerial 1 is an absolutely astounding piece of work by one of the great, sinfully overlooked pioneers of American Electronic music. Widely celebrated by fans since its original release, Important’s beautiful reissue marks the album's first edition on vinyl. Issued as a double LP limited to 500 copies, this is bound to be a revelation for anyone that missed it the first time around. Grab it while copies last.