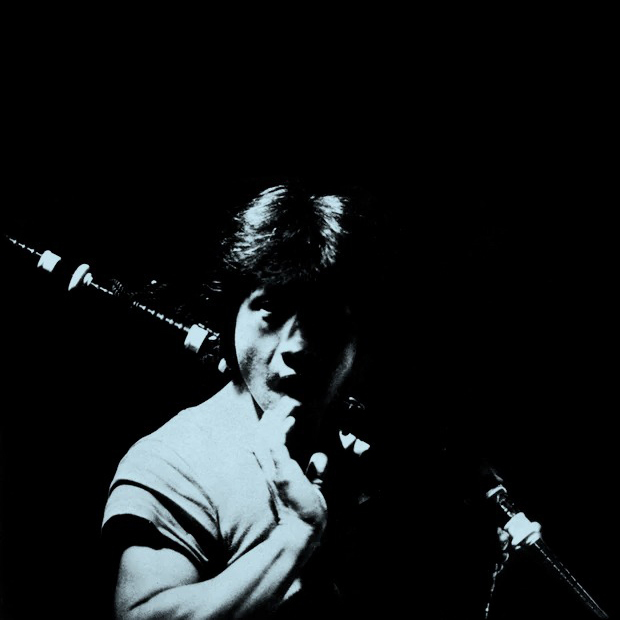 An absolutely stunning statement by one of the most important experimental artists of the last 100 years, Saltern's first ever vinyl pressing of Yoshi Wada's seminal, long out of print 1987 performance, "The Appointed Cloud", is an immersive and creatively brilliant gesture of durational tone and complex structure that rethinks the terms minimal music in real time.
By Bradford Bailey, 29 June 2021

Since its founding during the mid 2010’s by the composer, Tashi Wada, we’ve had a love affair with the Los Angeles-based imprint Saltern. Conceived as a means of support for artists working in his immediate circle, the power and historical importance packed into its small, carefully considered catalog of albums by Charles Curtis, Simone Forti, and Yoshi Wada is second to none. Now the label returns with its first release of 2021 and easily one of its most exciting to date, the first ever vinyl pressing of Yoshi Wada's seminal, long out of print 1987 performance The Appointed Cloud. Regarded by the composer as a personal favorite among his own releases, with this release planned in close collaboration with him prior to his untimely passing last month, its beauty and strikingly singular creative vision remain as powerful and intoxicating today, as when it was first laid to tape. An absolutely stunning statement by one of the most important artists of the last 100 years and a fitting sendoff that will carry his astounding legacy into the future for generations to come, this one is sure to top nearly every list rounding out 2021.

Yoshi Wada was among the youngest members of Fluxus. His work has also proven to be among the most enduring and influential produced by any of the artist connected with the movement. Following his move from Japan to New York City in 1967, Wada initially embarked on studies with La Monte Young and Pandit Pran Nath, before beginning to develop an astounding body of compositions for voice, bagpipes, and his own hand-made, invented instruments that emerged across the '70s, '80s, and '90s, documented by albums like Lament for the Rise And Fall of the Elephantine Crocodile, Off the Wall, Earth Horns With Electronic Drone, and Singing in Unison. These works represent some of the most important efforts within the canon of minimalist music, carving an incredibly influential path with their wild, liberated and yet deeply meditative temperaments. Arguably among the greatest of these is The Appointed Cloud, which laid in wait for decades before being issued in 2008 on CD by EM Records.

Staged in 1987 at the Great Hall of the New York Hall of Science, The Appointed Cloud was Yoshi Wada's first large-scale, interactive installation. This recording of the work - capturing its opening performance - brings together four musicians - three on bagpipes, Wada, Bob Dombrowski, and Wayne Hankin, and percussionist Michael Pugliese - and features a custom pipe organ and a number of homemade instruments, controlled by a computer with a customized interface and software designed and operated by the engineer, David Rayna, known for his work with La Monte Young. In Wada's own words: "[It] was one of the most memorable performances I've done. The space itself - the Great Hall of the New York Hall of Science - was incredible. The building was designed for the 1964-65 World's Fair and had spaceships hanging from the ceiling so people felt like they were traveling in outer space. It was an amazing experience with the sound of the pipe organ, sheet metal, pipe gong, and bagpipes all together. 60 minutes may seem like a long duration, but it didn't feel like it."

Like many of the works within the larger body of practice to which it belongs, The Appointed Cloud is a work of minimalism that consumes ear and mind with blankets of resonance and tonal interplay. It is a free-standing, sonorous space that rests within the physicality of secondary and third spaces. Where the album gains distinction is through the depth and scope produced by its expanded instrumentation and unique sense of structure. Three bagpipes and organ generate a dance of long-tones, overtones, and complex chordal groupings - moving from fluttering punctuations, meditative sustain, and full-on assault, shifting between the harmonic and dissonant - while a raw sense textural immediacy is produced by the varied interventions on percussion by Michael Pugliese, rendering an almost orchestral sense of scale across much of the composition. The outcome and effect is nothing short of astounding.

It’s rare to encounter a work that stands so firmly within the canon of American minimalism as The Appointed Cloud, while rebelliously shattering the boundaries of what that music is perceived to be. For anyone who hasn’t heard it, the album is bound to be an absolute revelation. This is Yoshi Wada at his best, and can’t be missed. It's easy to understand why its among his personal favorites. This edition - the first ever vinyl pressing - is issued by Saltern in limited edition of 600 copies, and has been fully remastered from the original tapes by Stephan Mathieu. Unquestionably one of the most exciting and important reissues of the year and not to be missed on any account. It’s as essential as they come, and a beautiful way to remember Wada, resting for enduring moments within the astounding sonic universe that he leaves behind.