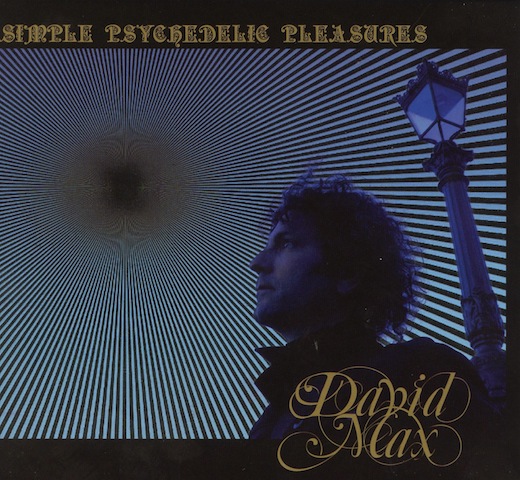 I love the Tadpoles, a quintessential American psych band, so chances are I was going to be all over David Max’s solo platter when I heard about it. And I am. I don’t want to go on and on with endless comparisons with his work with the Tadpoles because much of that is obvious. Let me just say that maybe its sort of another tentacle from the body of the Tadpoles; sprung from it, indebted to it, but operating with a mind of its own. And name-checking all of David’s influences, though tempting and valuable, seems obvious as well. I can hear all kinds of things swimming in this water, upstream, downstream, spawning. But, like I mentioned when I was turned onto Cary Grace towards the end of last year {and this disc does, for me, make a nice set of bookends with Ms. Grace’s Perpetual Motion … probably for reasons only clear to me … but you can ask …}, there’s no shameless aping or imitating. I could easily go through various tracks and say that sounds like Barrett, that sounds like 13 Floor Elevators, etc … but that doesn’t say much in this case. For me, as I listen to SPP, names like those pop into my head, but that’s only because they came first, I heard them first. I can strum a chord or two, and I bet if I sat down and really focused and saturated myself endlessly with, say, Syd, I could figure out something to play that people would say, “Hey, that sounds just like Syd!” But artists like Max, and Grace, don’t imitate in the name of flattery or irony or sarcasm or street cred … Max is far more in tune with those artists’ way of thinking, than he is with recreating their structures. This comes through as well in his covers of Syd and Nick Cave; sure, I know the songs. I recognize them. By forsaking note by note rebuilding, Max turns the tunes into his own and at the same time pays very loving respect to the songs, and the songwriters. Certain snippets and tracks make me think of other stuff, certainly, but not because he’s quoting a snatch from here or there, or trying to recreate a certain sound. If he was simply imitating and rehashing, it would all be a very backwards looking excercise. But by tuning into his touchstones’ paradigms and ways of thinking, Max is looking forward and building on what came before him. Psych, neo-psych, psych-pop {Everyone is Alien is a pop gem if ever there was one} has been around long enough “formally” that we’re a generation or two down the pike. It has its own continuum {sort of like that free-thinking tentacle mentioned above} that Max is a part of. He’s a master of the idiom. In a nutshell, it’s traditional. Dreamy, loose stretches of tracks like Three Moons in the Sky or The History of Man weave seamlessly together with buzzy, often slow burning, rocking tunes like The Deep End and the jauntier Everyone is Alien. There’s an organic ebb and flow making it very clear that Max has a firm grip on said tradition, but doesn’t shy away from taking the captain’s helm and taking it someplace fresh, and personal .. how else to account for the bouncy sparkling Dreamtime as it conjures up images of very happy dancing rubber-bands or some scalloping, ululating  treatments that point to some of the Elevators’ jug-band blowing details. That ebb and flow washes up on many kinds of beaches … I opted in for the obvious influences for simplicity’s sake and, well, the record itself has ‘psychedelic” in the title, but you can hear many, many more ingredients being stirred in the pot. Max has created a very singular voice, but not a dogmatic or exclusionary one. Hands down, this is one of the best things to fall into my claws this year, or any year. It’s a fantastic spin that … spins and orbits around itself and all the other planets that make up the system that it calls home. It’s its own, but part of that continuum and tradition; I guess like, on a smaller micro scale, how SPP is part of the Tadpoles own tradition and history. It’s not the Tadpoles, but it thinks like they did. And I for one and am ecstatic that it does … it’s a great way of thinking that just happens to feed the head as much as the ears. It’s up to you when you put it on to decide who is hungrier, the ears or the head. Either way, there’s plenty for both and enough for endless pleasures. I’ve only had it a short time, but I know I’ll be going back in over and over again … when someone sets up a house this complete and well stocked, it’s my job to visit as much as I can.