Body Without Organs were a duo from New York City consisting of Richard Behrens (lyrics, vocals, guitar) and Carl Howard (electronics, effects) formed in 1982. The pair brought together skill and ideas from such diverse areas as writing, poetry, ceremonial magic, studio technology, and mass media sounds and images. The name Body Without Organs could mean several things: a body, being an organization, without organs, or hierarchy; a form of anarchy, certainly opposed to the capitalist system, and if not directly opposed, then deeply skeptical of its effects on society. Behrens was interested in anthropology and mythology and the Golden Dawn System of Magick as a meditative tool. Sort of aural performance artists doing their performance work who released four cassette albums through Howard’s Audiofile Tapes between 1985 and 1987.

“Isis and Thoth”, originally released in 1985 is now available on vinyl for the first time. The album’s title pays homage to Isis: the protectress of the dead whose mournful tears for her husband/brother Osiris [the god of the dead who was murdered by his brother Set] were said to flood thee Nile annually, and unto the ibis or baboon headed Thoth: the heart [intelligence] and tongue [voice] of the sun god Ra. The nine compositions were created as scenes or moods with taped effects, delay pedals and found vocals. The duo employed droning synth syncopated with sparse percussive accents, esoteric vocal chanting, looping delayed beats, dissonant guitar and stuttering bass lines. “Scrap”, a bonus tracks retrieved from Behrens' archives has been included, and all songs have been remastered for vinyl by George Horn at Fantasy Studios. Each copy includes an 8.5x11 insert with photos and interview with Richard Behrens.

“When you will have made him a body without organs, then you will have delivered him from all his automatic reactions and restored him to his true freedom" - excerpt from the radio play by Antonin Artaud: "To Have Done with the Judgment of God" (1947) 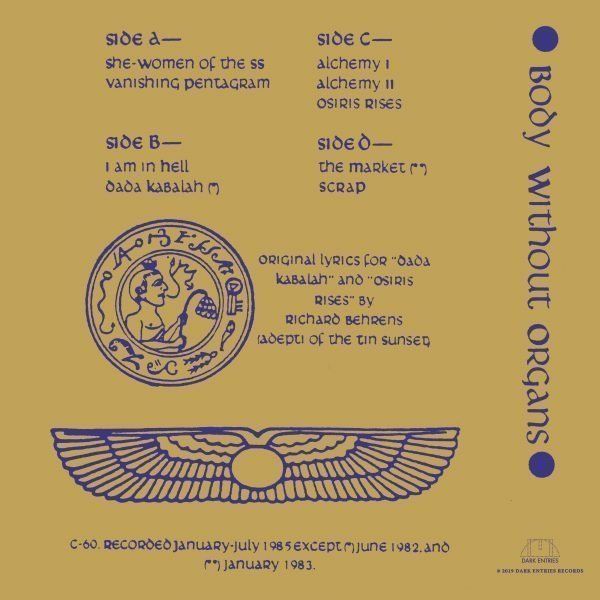