So much music claims to capture the moment. But as Processes & Potentials proves, in-the-momentness can be a malleable concept. The result of three years of studio work, the album sees Bjarni Gunnarsson following his longstanding interest in exploring liquid states, transformational activities and the complex relationships between cause and effect. It is music which behaves differently, unexpectedly, veering off into surprising directions and never staying in one place for too long Ð it is certainly no coincidence that one of the pieces here is called Momentaries. The reason for this fluid, intuitive development is Gunnarson's conviction that it is infinitely more exciting to follow and shape the path of his materials as it is unfolding rather than mapping out the trajectory in full from the outset: One should not constantly think of a final result while creating, as he puts it, Rather, it is important to engage in the process and its becoming.'Processes & Potentials is, undoubtedly, an uncompromising work in its austere sonic design, crackling rhythmical pulses dancing on top of monochrome tectonics and convoluting sounds. But at the same time, it is one of the few sound art releases that gets the adrenalin pumping as well, with each of these six piece seamlessly passing through a variety of concise scenes, ranging from the pastoral and serene to the delirious and confronting. Applying layman's psychology, it would be easy to explain this approach by Gunnarsson's curiosity and wandering spirit, by his moves from Iceland to Paris, Berlin and The Hague. More to the point, however, he never ceases to be fascinated by the undiscovered potentials of creativity and what it is, exactly, that defines the resulting sound processes. It may lead some listeners outside their comfort zone for the album's 47 minutes. But then again, it makes each single moment contained within them feel a lot more precious. Tobias Fischer. 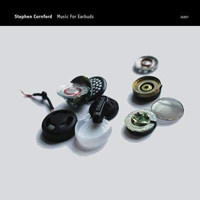 Annea Lockwood
A sound map of the Housatonic rives
CDr | €14.00