€17.90
+
-
**250 copies on black, embossed lettering, 16 page booklet** Comprised of the poets bpNichol, Rafael Barreto-Rivera, Paul Dutton and Steve McCaffery, all of whom are notable for their solo efforts, The Four Horsemen was Canada’s first sound poetry group, active between 1970 and the late 80s - disbanding following the untimely death of founding member, Barrie Phillip Nichol. Nada Canadada, originally issued in 1972, the album reissued before us now, is their debut recorded outing, making its historical significance unavoidable.

Beginning in the realms of radical improvisation, not long after embarking on the project, Four Horsemen began to develop a new scoring method for the group's dynamic and visceral performances, intended to establish a platform for greater freedom of expression. These early group-conceived and written compositions grew into Nada Canadada - nine outbursts of controlled madness dedicated to the memory of Hugo Ball. It remains one the great examples of Canadian sound poetry - the human voice taken to new heights, grown from the notion of community. 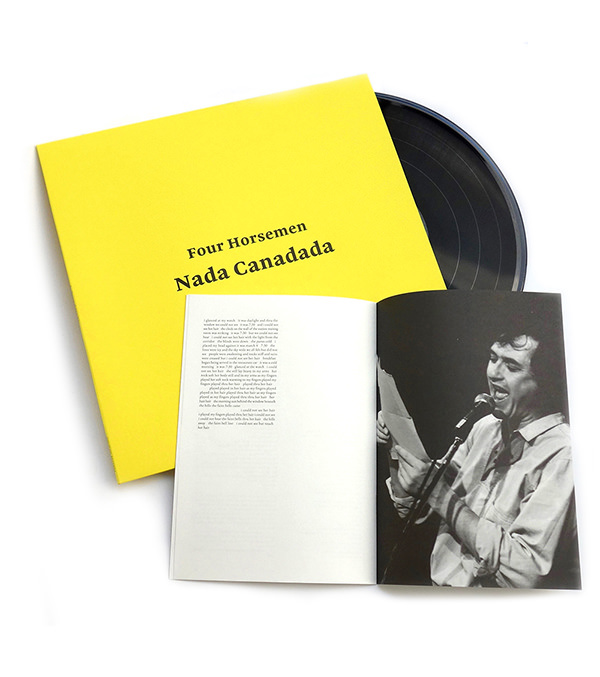 For all its wild madness, the elegance and musicality of Nada Canadada is unavoidable. Despite its challenges and the ground it took, it is an incredibly listenable body of work. It is filled with humor and joy - rippling sonority, which is human yet brilliantly abstract. Issued in a limited edition of 250, Holiday Records’ reissue of Nada Canadada is the first of any kind, making it an essential entry for any fan of sound-pointy and the challenging space between sound-art and experimental music.
Grab this one fast, it’s incredibly good and not going to sit around for long.