Side A: 20% heavily armed with random discharges of radio-wave theatre and metal noise. Multiple blows with a heavy hatchet along the time axis, but no blood flows. From the speakers, the right and left wing exchange blows but reconciliation remains eternally unreachable. Steeped in idle repetition in a comfortably heated secret chamber. With several random passers-by, sounds like those made by slapping a wet towel alternate between life and death but in a continual state of existence. However, it was all meaningless. 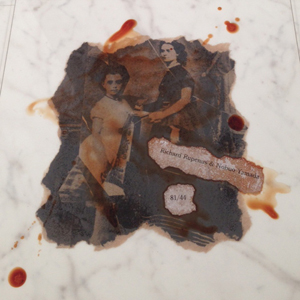 Side B: Misshapen metal objects roll around randomly, 100% liberated in their movement. Junk noise flies about in every direction, howling at distant objects, wildly spasming, rolling around on the floor, having sudden heart failures, and constantly apologizing for its own violent impulses. Yes, finally the expression of those capricious modulations begins to show its charm, and losing none of its freshness rusted fragments fly up into the air in Japan and the UK.

Handmade jacket consisting of a decorated transparent acrylic sheet (each one is different) | The background color changes according to the light conditions | Limited edition of 150.