Matching Mole was the band that drummer/vocalist Robert Wyatt formed after he left the pioneering UK outfit Soft Machine in July, 1971. Over the course of its brief, one-year existence, Matching Mole would develop a characteristic sound, a unique take on fusion, with interesting structures that encouraged individualistic expression through solos. When one of the members came across a forgotten live show on tape -- identified simply as 'March, 1972', they immediately contacted us, and this album is the result. Recorded live in Europe 3/72, shortly after Dave MacRae became the keyboardist, this includes the basic repertoire that the band would perform during their lifetime, with a few surprises thrown in. The sound is surprisingly superb for a live show of this vintage, and once again Tom Recchion has come up with a charming cover." 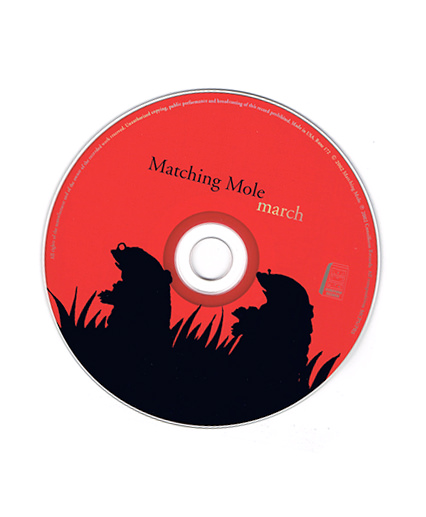 "There's sometimes a sense of a band playing at the limit of its abilities which can result in moments of tedium as well as brilliance. But as my mum used to say, you can't make an omelette without breaking some eggs, and overall this is a dish well worth tucking into." P. Marsh, Bbc