**500 copies** A collection of duo recordings featuring Ken Vandermark in collaboration with internationally renowned, and critically acclaimed, musicians: Kris Davis, Hamid Drake, Paul Lytton, Ikue Mori, and William Parker. The material is documented on 5 CDs and was recorded during performances at Vandermark’s second Stone residency in New York City during January of 2018, and at Experimental Sound Studio in Chicago.
The improvised music included is remarkably expansive, in terms of instrumentation, improvisational methodologies, and aesthetics. Starting with a duo studio session held at ESS in June of 2015 with British improvisational innovator and percussionist, Paul Lytton, the resulting material has a focus on speed, rhythm, texture and tension. Then the documentation shifts to a series of concert recordings made at the original Stone over the course of three nights. They move from long-form electronic and reed explorations with Ikue Mori; to acoustic dialogs between pianist Kris Davis and Vandermark that reference 20th and 21st century new music innovations; to a contemporary look at free jazz materials, involving one of the master musicians connected to that history, bassist William Parker. 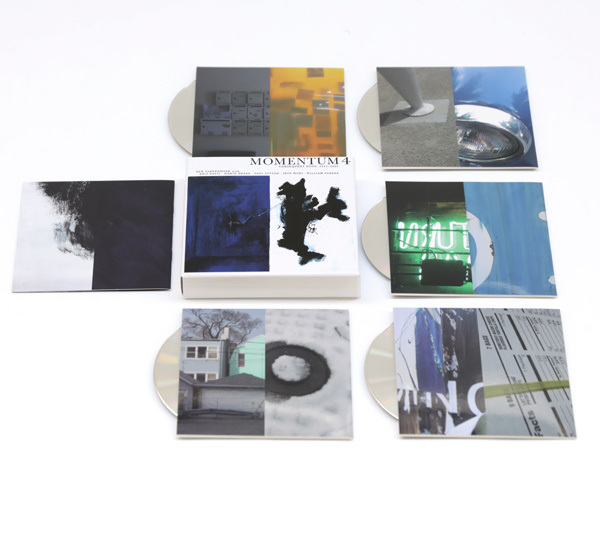 The entire set of music concludes with a another studio session at ESS, this time in January of 2019, and connected to one of the longest associations in Vandermark’s creative career, that with drummer / percussionist Hamid Drake. Remarkably, after playing together for 25 years, this is their first duo recording.
Momentum 4 : Consequent Duos 2015>2019 is beautifully designed by Fede Peñalva, who has contributed an original painting to the artwork. In addition to the 5 CDs of original music, the collection includes a 16 page, full color booklet with extensive liner notes that cover the histories and contexts involved, regarding the musicians and the recordings, as well as new photographs by Vandermark, and portrait images of Davis, Drake, Lytton, Mori, and Parker. 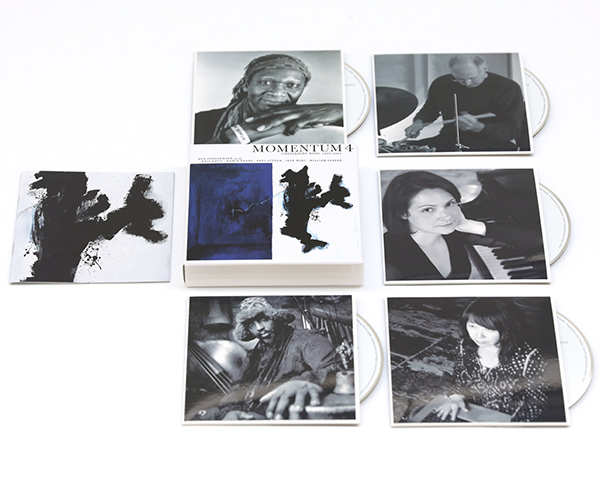