All Other Voices Gone, Only Yours Remains (LP)

**300 copies DMM Pressing on 180gm vinyl, matt outer sleeve + UV selective varnish on 350gm paper, black paper inners, hand numbered** All Other Voices Gone, Only Yours Remains unites the UK’s The Humble Bee, America’s Offthesky, and Spanish photographer and artist Nieves Mingueza. Iikki focus on dialogues between visual artistry and musical artistry, and All Other Voices Gone, Only Yours Remains is a heavenly episode. Opener For Her Breath Is On All That Hath Life is a delectable, swirling dream, the thrill of a new romance, where Cupid’s arrow inflicts a purple bruise that looks more like a gorgeous sunset, feeling less like a painful stab and more like a tender kiss. The cherished wounds still show up on the skin, and the music is scented with a dreamy perfume. A deep intoxication grips the record. The atmosphere is warm and safe: nothing can harm. The same is true for Mingueza’s dream-world and her striking contrasts between the real and the unreal. Dreams are a safe gateway, boundless and pregnant with possibility, and their music is just as expansive, yearning for a dream to come true. There’s a sharp disconnect between dream and reality, though. In the fiction, everything works out. There’s no decay or decline. In reality, the barbaric reigns: children are being separated from their parents and placed in cages, even in such a place as America, the so-called free world. So there’s an ache, a pang, to stay in the dream, to unplug and disconnect from the cruelty and the overwhelming dissonance of the world. To turn off, shut down, and live within the music. But the dream cannot survive: it has a half-life, a mere eight hours at best. The piano understands and accepts this, because the notes dissolve in the middle of the track, already failing and crackling at the seams. Fiction is exactly that. The music’s soft heart provides an innocent sound, and one as natural as breathing. Her voice is a beautiful aria, and her breathing in the quiet of the night is a delicate rhythm from the divine. Love is the sweetest music. The underlying oscillations and textures are buried deep within the mix, forming a central part of the swirling sound, while other instruments provide a form of ornamentation, a hanging necklace to add colour and depth to the body of sound. They do more than decorate the music, though. Crackles and hisses squeeze into a tight and once-vacant space, but it never feels claustrophobic. Things flutter in the mix. More sounds become involved and the mix turns muddy, becoming more fragmented, breaking up. The first signs of decay are on the horizon. The seasons turn and the ambient music remains true, like the strong bonds of love. Even the strings lose their sharp contours, not so much slicing with a sharp, acidic tone but echoing with softness. This softness is like love: patient, forgiving, accepting. Sliding rather than grating, the strings travel through a waterfall of reverb, coming out refreshed. Dreams are a doorway to utopia. Reality is a one-way street. Dreams offer intoxication and warmth. Reality is a splash of cold rain. - James Catchpole 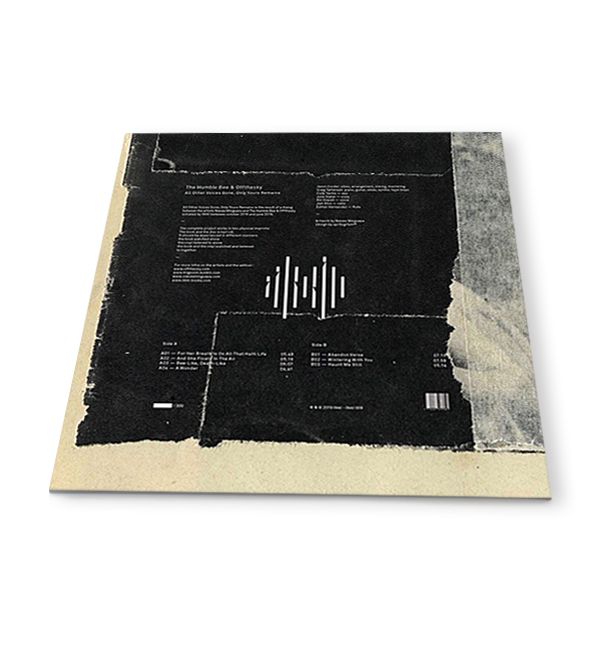 The Humble Bee is the solo project from Craig Tattersall, a former member of The Remote Viewer and Famous Boyfriend bandmate Andrew Johnson. Tattersall's music can be found these days more often under his alias The Humble Bee, as a founding member of The Boats and in his collaborative works with the likes of Bill Seaman in The Seaman and The Tattered Sail. He has run the wonderful label Cotton Goods from 2008 to 2015 and since 2009 he has recorded nine albums with his moniker The Humble Bee. Originally from Kentucky, since 15 years Offthesky is the prolific musician Jason Corder who currently resides in Denver, Colorado in the United States. His catalogue shows over 70 albums which have been released by a number of labels such as Databloem, Dronarivm, Eilean Rec., Hibernate, Home Normal, Rural Colours, SEM Label, Wist Rec.