Kaoru Abe's duo with legendary free bassist Motoharu Yoshizawa, nord, stands as a critical summit between two of the major forces in japanese jazz at the time. recorded in december 1975 and released in 1981 by Kojima, it reveals a different side to Abe.the two had apparently been playing together since the late '60s - Yoshizawa had, for various reasons, and it's probably due to yoshizawa's undeniable heavyweight status that this dialogue is conducted largely on his terms, with abe toning down his wildly over-the-top style and curbing his natural excesses. 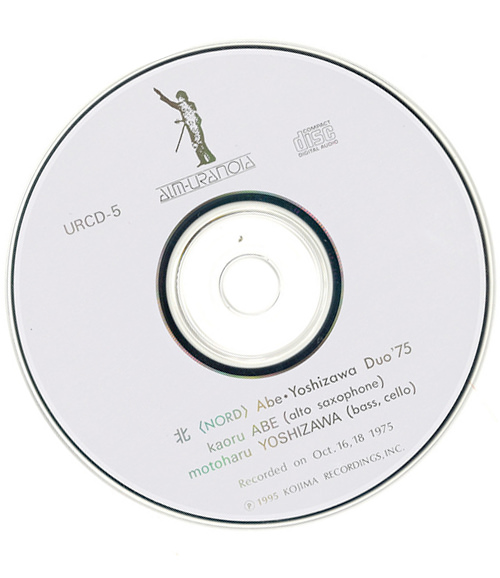 Yoshizawa's clever and subtle playing underwrites proceedings; the two conduct three numbered untitled 'duo improvisation's filled with wide open spaces, passages of complete silence, and generally delightful and highly skilful matches of catch-as-catch-can. for his part abe (on alto throughout) concentrates on flurries of varying lengths in the upper reaches, his quicksilver gestures and decorative trills dancing, circling and flying away. yoshizawa (on bass for two of the pieces and shivery cello for the third) engages in typically nimble fingering and dextrous wrist-flicks, penning the beginnings of sentences for abe to pounce on and finish in his own words, changing their meaning and warping their logic.