**Back in Stock** A sequel to the legendary Topography of the Lungs that first brought together the three improvisers almost half a century ago for the seminal 1st album on Incus label. Recorded in 1981 by audio engineer and label owner Jean-Marc Foussat, the trio of guitarist Derek Bailey, saxophonist Evan Parker, and drummer/multi-instrumentalist Han Bennink are heard in an amazing evening of performance at 28 rue Dunois, in Paris, France, in duo and trio configurations, exploring material similar to Parker's "Topography of the Lungs". Absolutely essential. "This analogy between free improvisation and human nature seems appropriate. Some people, seeing a burning building, will flee for their lives, while others run straight into the building. Mention the names of any member of this trio—Derek Bailey, Han Bennink or Evan Parker—to listeners and they either give a big hoorah or make a break for it.

Now that we've cleared with room of runners, let those that remain rejoice in a rare recording of these improvisation masters together. Besides Topographie Parisienne there is only the seminal trio recording The Topography Of The Lungs (Incus, 1970), which would later be a reissued CD by psi in 1986 and LP from Otoroku in 2018. Various duos can be found, Bailey/Parker's The London Concert (psi, 2005) and Arch Duo (Rastascan Records, 1999), Parker/Bennink's The Grass Is Greener (psi, 2002) and Derek Bailey & Han Bennink (Incus, 1972). Where this Paris live date from April 3, 1981 has been is anyone's guess. Needless to say, when you are running into a fire you don't ask questions. 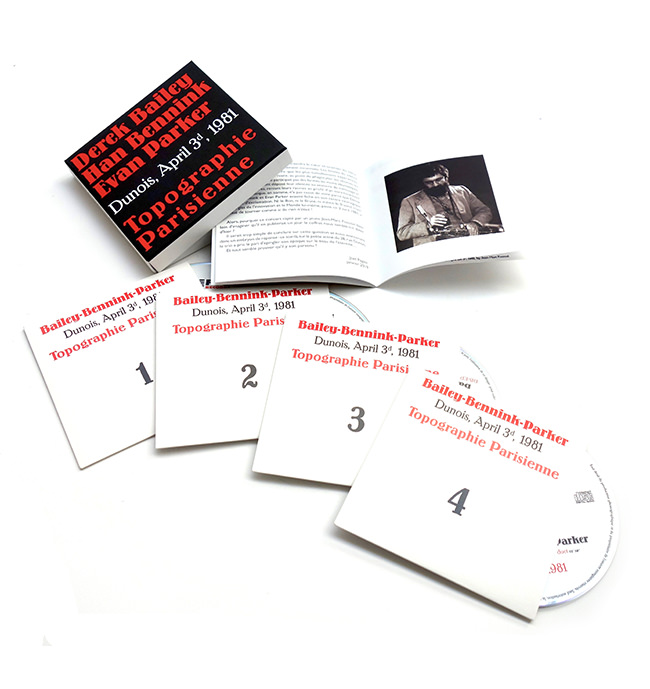 The music presented here can be broken down into two lengthy trio blocks, five duos, and two solo performances by Parker. Sorting out the group dynamics and character struggles between the players (all head-strong folk) is better left to personal friends/musicians and maybe a psychoanalyst. But it is great fun to witness the push/pull of master free improvisers exerting their will and responding to the impulses of their partners. Bennink plays the part of the eternal prankster, never content to remain at his drum kit. He blows a bulbous trombone, some clarinet, tortures a harmonica, and even hammers at a piano, which Parker comments on as rubbish. Except for the first duo in CD1, the mix is quite good. Maybe it is just that Bailey is playing acoustic guitar here, that he gets lost in to tumult of Parker's saxophone and Bennink's mayhem.

By 1981, each of these musicians were fully developed and their sound was familiar territory to devotees. This set carried none of the "shock of the new" that The Topography Of The Lungs possessed. Nonetheless, the sound sizzles with energy. Bennink's modus operandi is to always push his partners into new territories. The energy jazz he coaxes from Bailey could be taken as a lesson plan for Nels Cline, and may be the highlight of the recording. Parker is another case, his stoicism endures, sort of. His trademark circular breathing remains a treasure and he perseveres while Bennink entertains the audience with whistling, bass clarinet squawk and visual jokes. The three and three quarter hours of music is never repetitive and always entertaining. It is a great reason to run into a burning building of free improvisation. " M. Corotto 'AllAboutJazz'